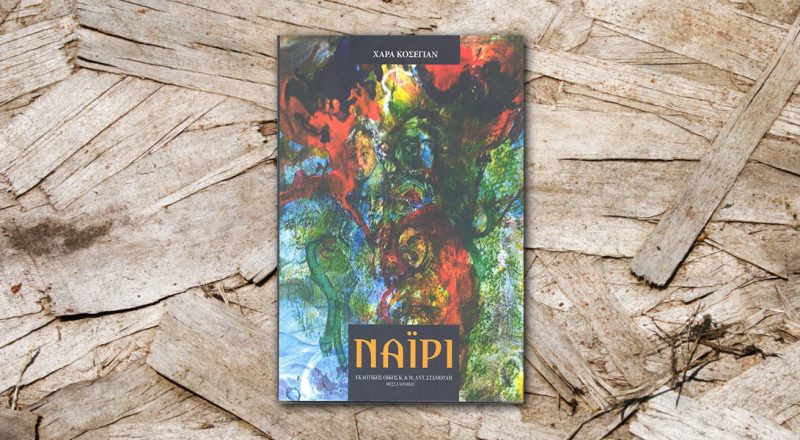 Nairi, the movement and the encounter of the waters brought together and mingled lives that originated elsewhere to meet in the same place, Cyprus, for the same reason, a conference of dialectics, to talk about the Before and Now and to change Tomorrow. Two Greek journalists, a Pontic Greek university professor, a Bulgarian dialectician, a French-Armenian researcher,and a Kurd university professor will meet with local scientists and local residents to talk about the island’s history and contemporary politics, to travel with the memories of the people but also to experience their personal stories that will shape their lives from now on.

Lydia, a Greek journalist, and Dennis, a French-Armenian, had additional reasons to come to Cyprus, which readers are gradually discovering. The novel has a calendar form, alternating between the central heroines. Their paths will meet at some point and (from then on) a Cypriot of Armenian descent will move center stage and will allow one of them to experience a great love, while the other will encounter her personal history and roots. She came to the island in search of her father’s crossing, and will depart with a brother whose existence no one knew before. Not even himself, since he was also unaware of his real name or his father.

Together they stir up memories, experience passion, discover their roots, stumble on the line with intrigues and obscure obsessions. Life will become a torrential rush that will bring them face to face with their fears and dreams. It will reveal and test them. The lives of some of them will drastically change. In a subversive manner.

Lydia, even though she will come face to face with love’s entire colour palette, will eventually be able to hold on to the most beautiful colour…

Human lives resemble water streams that overflow or dry up, sow and sweep away, destroy or nourish…

Nairi, where the brooks meet, the water rises and rotates…

Chara Cosseyan was born in Nafplio and spends her time in Rhodes and Athens.

She is a Doctor of Philosophy at the Faculty of Philosophy of the University of Athens, a school counselor in the Dodecanese and an author.

She has written numerous articles and studies in scientific journals. She has also published 3 scholarly books:

Ancient remnants in Modern Greek folk songs – A contribution to research through the traditional songs of Karpathos, published by Papazisis, Athens, 2010.

Evaggelia Moula – Chara Cosseyan, The use of comics in education, published by Kritiki, Athens, 2010.

Since then, she has published the following novels:

A book including her award-winning stories has already been published:

She is also writing for various newspapers and has spent some time as a radio producer.