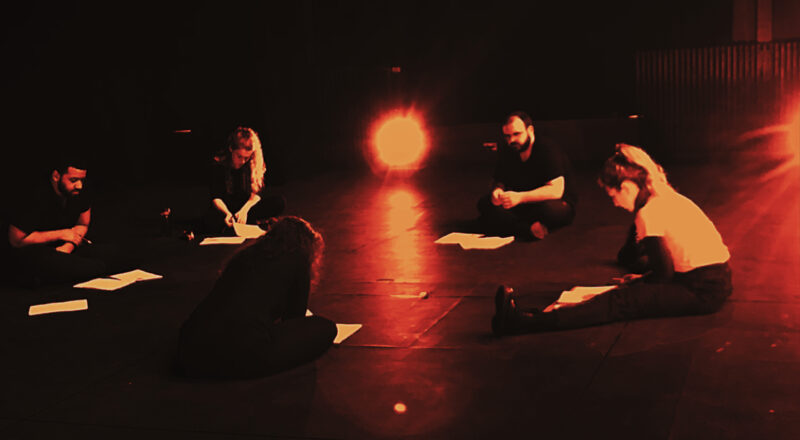 Led by Thinking Acts (Scotland), in partnership with Chorus (Greece) and Teatro Joao Garcia Miguel (Portugal), “A POETIC CONSTITUTION:  Caring Europe” aims to generate a new performative, participatory and critical space for the European question and create an artistic space for the construction of the self and its relationship with a social and relational ecology: a kind of equidistance, solidarity, fraternity, between the different people, origins and ethnicities.

We are asking three relevant questions on identity/nationality/sense of home and belonging to a larger community, that of Europe

This project is based on this disease/feeling of lacking a home (homesickness. This is a force that made people go in a search for other homes and now it is this same force that makes us want to discuss and reevaluate what it means being European and what kind of house Europe represents for us, which we all feel both in need and lack of. It is a kind of paradise, or Ilha dos Amores (in Lusíadas de Luís Vaz de Camões). Back to Ithaca.

THREE playwrights,1 from Scotland, ONE from Greece and ONE for Portugal will write ONE theatre play to reflect about “nowhere is now here”— with the coaching help of experts covering areas such as: immigration or refugee reception policies, new religions, astrologers, philologists, global terrorism, fake news and political and financial marketing.

The play will be loyal to the source material, rawness of expression and musicality and the fears and hopes of the participating groups/ They will be multilingual to reflect the diversity and cultural richness of the three countries, their history and their future woven into the old European, the Mediterranean and Europe’s northern corners. Performances will happen in all three countries live and digitally The performances will encompass elements of the Theatre of the Oppressed with a trained and non-trained actors as performers and members of the the Community as a Chorus element to reflect the urgency and authenticity of the discussion

To consolidate the role of Art as a means and an end to restore and repair social trauma and conflict.

To combat the temptation of neo-fascism. The capacity of neo-fascist movements have to make people feel included and remembered when they themselves feel forgotten by their governments; the illusory and attractive way of exploring demagogic and populist arguments with those who feel isolation or social insecurity

To sustain the reparative practices that emerge from the theatre of cultural justice through intercultural, interreligious and translingual dialogue.

The raising of European Community purpose and spirit through interaction between southern and northern epistemologies Intellectual inheritance and legacy through a Perpetual platform for cultural organisations and performers.

In conversation with Director João Garcia Miguel, Virginia Vassilakou of Chorus Greece and Kat Harrison on Europe, identity and the birth of Poetic Constitution

The pilot version of the project that took place in Glasgow in November 2020. Click the link to view the play.